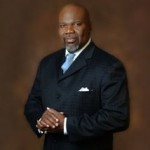 T.D. Jakes recently released a new book on forgiveness that has at least one critic accusing the renowned preacher of denying the doctrine of original sin.

Chris Rosebrough, an apologist, rejected Jakes’ statement to CP that forgiveness is innate and unforgiveness is learned from one’s environment. There isn’t a “single passage (in Scripture) that says human beings are by nature forgiving,” he argued.

Rosebrough explored the premise of Jakes’ new book Let It Go: Forgive So You Can Be Forgiven on his radio program, “Fighting for the Faith.”