“She presents that veritably, she’s scrimping and saving, eating peanut butter sandwiches by firelight to save on electricity but sighing contentedly amid all this hayseed hardship. What Moore doesn’t tell you is that the Moore property in Tomball TX, these “modest woods,” as she puts it, that “would not be beautiful to everybody,” is part of a 46 acre enclave with its own road, two houses with total of 7 bedrooms and 7 1/2 baths, custom outdoor kitchens and fireplaces, a combined square footage of 6600 sf, and assessed by Harris County TX at $1.8 million dollars.”

(Elizabeth Prata – The End Time)  I know that we’re all familiar with the ridiculous extravagance of some of the word of faith preachers. Kenneth Copeland, Jesse Duplantis, Creflo Dollar, Joyce Meyer and Joel Osteen with their jets and mansions and vacation homes and gold commodes and the like….

Occasionally when someone comments on their over-the-top lifestyles of these supposed men and women of God, especially the private jets, replies often veer to the extreme in defending their purchase and use for a ‘ministry’. Duplantis said he needed the plane so he could work. Copeland said the same, the private plane is his sanctuary. They agreed they could talk to God better and there would not be distractions of people coming up to them asking for prayer. They needed the plane so they could work. Remember these reasons later. For work.

Can you picture Paul spending ministry money to hire this palanquin, the Lear Jet of the day? 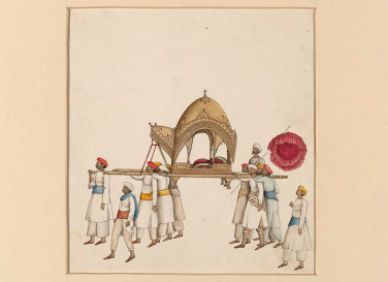 We chortle and giggle at these obvious extremes, and wonder how much money could be spent elsewhere if only the preacher would cut down on the luxury living and donate the funds to worthy ministries, their own congregation, or anywhere else except to support their self-indulgent lifestyle choices.

The Bible is clear on life and doctrine. Ministers and leaders must be pure, humble, and Godly. It is not a sin to be rich, not at all. Abraham and Job and Solomon and Joseph of Arimathea were extremely wealthy. Lydia was rich. Joseph and Mary were nearly peasants and many of the disciples were simple fishermen. The Bible runs the gamut on the sliding scale of wealth, showing us many different people and lifestyles in its pantheon of heroes and villains. The point isn’t having the money. The point is what you do with it.

The Bible does warn, however, that it is easier for a camel to go through the eye of a needle than for a rich man to gain heaven. (Matthew 19:24). Barnes’ Notes explains well…    View article →