“According to Fox 19, the school had readied additional security at Covington Catholic High School for when students return Tuesday following threats of violence issued against the school and its students since the weekend. The American Indian Movement Chapter of Indiana and Kentucky are scheduled to protest at the Diocese of Covington at 10:00 a.m. local time.”

(Joshua Caplan – Breitbart)  Covington Catholic High School, the Kentucky school at the center of a national controversy over a viral video of an encounter between some of its students and a Native American activist at Friday’s March for Life in Washington, D.C., has canceled classes Tuesday due to safety concerns. 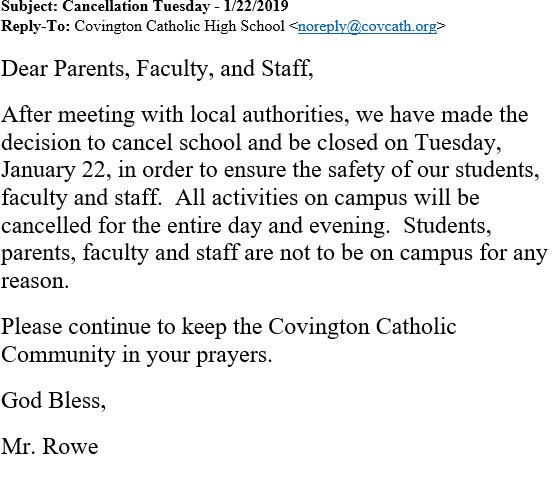 “After meeting with local authorities, we have made the decision to cancel school and be closed on Tuesday, January 22, in order to ensure the safety of our students, faculty and staff,” Robert Rowe, the school’s principal, wrote in an email to parents and employees. “All activities on campus will be cancelled for the entire day and evening. Students, parents, faculty and staff are not to be on campus for any reason. Please continue to keep the Covington Catholic Community in your prayers.” View article →

Here’s What You Need To Know About The Confrontation Between Covington Catholic Students And Native American Protesters,